Efforts to reform overprescribing in Medicare and other health policy must ensure patients are not left to turn to dark web markets for synthetic opioids.

Washington, D.C. – A newly released report from the Centers for Disease Control (CDC) provides troubling insight into the rapidly growing role that synthetic opioids, such as fentanyl and carfentanil, are playing in fueling the nationwide opioid epidemic. The fatality rate from these synthetic drugs doubled last year from 2015, sharply contrasting with the still tragic but far less extreme growth in the prescription opioid death rate by around 11 percent. As policymakers in Washington work to reform health policy to address overprescribing issues, including recent proposals around Medicare, ASAP urges elected and federal officials to take this disparity into account, and prioritize legislation such as the bipartisan Synthetics Trafficking and Overdose Prevention (STOP) Act that would help cut of the source of toxic synthetic drugs from overseas. The data give clear signs that we are not doing enough to stop the supply chain of incredibly potent synthetic drugs manufactured abroad and easily shipped into the country by foreign drug traffickers. 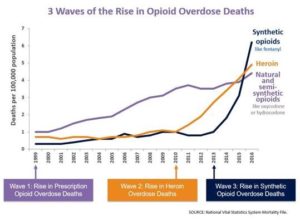 Policy efforts on opioid prescriptions have been solely around what the CDC calls “Wave 1” of the opioid crisis, a rise in prescription overdose deaths, while the data show the country is firmly in “Wave 3,” marked by a sharp rise in synthetic opioid overdoses, as seen in the chart above. Health experts have warned that these one-sided efforts could result in pain patients turning to illicit markets, including the dark web, as a source for synthetic opioids as prescriptions are reduced.

A primary source for synthetic opioids entering the United States is the global postal system, facilitated by a major security loophole. While packages sent through private carriers must include advance electronic data (AED) used by law enforcement to screen and stop dangerous material, including deadly drugs such as fentanyl, packages shipped via foreign postal services do not require the same information. A new bipartisan report from the United States Senate Homeland Security Permanent Subcommittee on Investigations (PSI) found that only 36 percent of foreign packages delivered by the USPS include AED, and that the limited data provided is too low quality to be useful, meaning over 1.36 million unscreened and potentially dangerous packages enter the country every day. As a result, the report found that online drug traffickers prefer and recommend the use of the postal system for shipping synthetic opioids and other illegal drugs into the country. The STOP Act, currently before the Senate Finance Committee, would help stem the flood of synthetic opioids by requiring all packages sent from abroad to include vital AED needed to screen and stop deadly drugs, and ASAP urges its swift passage.

“We can’t ignore the data: synthetic opioids continue to fuel the epidemic and push the death toll higher,” said Governor Tom Ridge, senior advisor to Americans for Securing All Packages. “The postal loophole provides drug dealers with unacceptably easy access to send the most powerful poisons to American communities and families. We would like to see Congress send the STOP Act to President Trump now so that we can help cut off the flow of fentanyl and carfentanil from abroad.”

“We need to be attacking the opioid epidemic from all sides, or we’ll never see an end to this crisis,” said Juliette Kayyem, senior advisor to Americans for Securing All Packages. “While recent statistics on the reduction in overprescribing are a step in the right direction, they are not helpful if Americans suffering from addiction continue to turn to illicit, foreign sources for powerful opioids. We must close the postal pipeline now to keep these poisons off our streets and out of our country.”

The STOP Act currently has 30 co-sponsors in the Senate and 261 co-sponsors in the House of Representatives. The legislation is endorsed by those on the front lines of the opioid crisis, including the Fraternal Order of Police, the American Medical Association and the National Conference of State Legislatures. The President’s Commission on Combating Drug Addiction and the Opioid Crisis also called for the bill’s passage in its final report.